Short post today, For anyone whose ever been on a hunt for an offline installer version of Adobe Acrobat Reader, here is where you can find it:

This is part two of Configuring IPSecuritas with a Sonicwall TZ190 Enhanced. If you missed the first part you can go back and check it out here.

Find the information you recorded in Part 1, we’ll need it below.

Okay here’s another guide that probably should have been put online sooner, but hey better late than never right? I’m sure there are probably a ton of TZ 1×0’s kicking around and if you’ve got a MAC and want to VPN in, but don’t have the SSL vpn software then you’ll need this guide. I’ve not tested this with anything other than a TZ190 Enhanced, but I’m pretty confident that it would work with at least any Enhanced OS in that same generation of SonicWalls, and maybe even outside of that generation as well.

This is the equivalent Global VPN Client for Mac.

Here is Part 1 – Router Side Configuration:

Once You’ve completed these steps and Recorded all of the necessary information that you were asked to record, download and install IPSecuritas from the link HERE, and then Hop over to Part 2 – Configuring the IPSecuritas Client on a Mac, Here.

I’m always getting yelled at for setting up Auto-Archive the wrong way, it’s not because I don’t know how to do it, and it’s not that the items that I set out to archive don’t go where they are supposed to, it’s that the NEXT time any archive is run, Outlook chooses to use a new file, in the default location. This may be fine for you, but most admins prefer that these archives be stored on a share, or somewhere else that’s easy to back up.

And this is where you say, well use a GPO. The problem with that is a lot of the time not every user will want the same settings, or same location for their archive, and some users are really good at keeping their inbox clean, so why force them to archive old items? 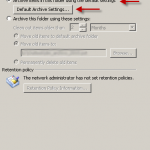 Anyway here is the long and short of getting Outlook to archive items to a manually created Archive file on a network share, and getting it to continue to use that same archive file for future archives:

I had users over the weekend update Mac OS X 10.6 to version 10.6.7, after the update they were unable to connect to thier Net Extender . When they tried to connect, it failed and then displayed the connetion log. The log contained the following entries:

I’ve only tested this fix for Net Extender version 5.0.680, but I’ve confirmed that it’s working with that version. We’ll need to adjust the permissions on the folder /usr/sbin/pppd:

Enter your password at the prompt, allow the command to complete. Once that’s been entered, close and reopen the Net Extender, and then you should be able to connect.